The Science of Hypnosis

By: Chantell Williams Listen to Youth Radio’s investigation: The Science of Hypnosis

Hypnosis has been around for centuries. It’s been shown to reduce stress, anxiety and pain. Yet the practice is still struggling for mainstream public acceptance. New research from Stanford University is applying the latest medical imaging tools to figure out the science behind hypnosis, and what makes it work. Youth Radio’s Chantell Williams wanted to know what hypnosis can do for stressed out teens.

First, here’s what hypnosis isn’t: it’s not brainwashing or magic like in the cartoons. Hypnosis is a trance-like state of heightened concentration and it’s more common than you might think.  Katie Duchscherer, a psychology major at Stanford University, says, “If you’ve ever really gotten into reading a book or watching a television show and the rest of the world around you has sort-of gone away. Hypnosis is very similar to that.”  read more

Look into my eyes. The phrase calls to mind images of a psychotherapist swinging a pocket watch. Or maybe you picture Catherine Keener in the film Get Out, tapping her teacup and sending an unwilling man into a state of hypnotic limbo.

“There are many myths about hypnosis, mostly coming from media presentations,” like fictional films and novels, says Irving Kirsch, a lecturer and director of the Program in Placebo Studies at Harvard Medical School. But setting aside pop culture clichés, Kirsch says hypnosis is a well-studied and legitimate form of adjunct treatment for conditions ranging from obesity and pain after surgery to anxiety and stress.- read more

Hypnosis isn’t just for hucksters and Hollywood villains any more. Neuroscience studies have shown that this mind-body therapy affects the brain in extraordinary ways. Clinical trials have demonstrated its effectiveness in treating anxiety, phobias, skin rashes, irritable-bowel syndrome and acute and chronic pain.

In France and Belgium, anesthesiologists are offering hypnosis combined with local anesthetic as an alternative to general anesthesia in surgery. In North America, medical centres such as the Mayo Clinic have added hypnosis to their pain-management tools.

Hypnosis doesn’t work for everyone, notes Dr. Amir Raz, Canada Research Chair in the cognitive neuroscience of attention at McGill University and the Jewish General Hospital in Montreal. But “in my opinion, it’s completely underused.”  read more

What Is the Science Behind Hypnosis?

Hypnosis is a real phenomenon, and even animals can be hypnotized. But what hypnotism is, exactly, remains unclear.

In a remarkable experiment reported in the New York Times [1], subjects were given the post-hypnotic suggestion that they would see words that would appear incomprehensible as if in a foreign language. They were then put in a brain scanner and asked to perform the “Stroop task” in which one reads aloud the color of words but not the text.

Here is an example Stroop task shown in English and Dutch.

When the words are in a foreign language, the task is easy. When they are in your native language, it is almost impossible to do correctly (try it!) due to an “interference effect” that causes the meaning of the words to take priority over their visual color.

However with the post-hypnotic suggestion, subjects were able to do this task effortlessly. Not only that, but the fMRI brain scan revealed that the brain region responsible for language did not become activated. So not only did the words “seem” to the subject to be in a foreign language, the brain actually processed them as if they were. This experiment may be the first solid evidence that hypnosis is a real neurological phenomenon.

But what kind of phenomenon is it? This is where the controversy begins.

Hypnosis is generally regarded as an altered state of consciousness, a broad category that includes meditative states, the “flow” state, psychedelic drug-induced states, and psychosis. But since consciousness isn’t understood, alterations to it aren’t very well understood either.

More specifically, hypnosis is a state of extreme “suggestibility,” a phenomenon that includes the placebo effect, advertising, and religious cults, but may also include any context-specific behavior. If a stranger at a train station asks you to take off your clothes, you would call the police. But if a stranger wearing a white coat at a hospital makes the same request, you would comply naturally. Have you been hypnotized?

Hypnotism may simply be the artful manipulation of attention, language, and context to establish an alternate set of temporary beliefs, which then influence perception and behavior.  read more

SCIENCE
This Is Your Brain Under Hypnosis  NY TIMES

Hypnosis, with its long and checkered history in medicine and entertainment, is receiving some new respect from neuroscientists. Recent brain studies of people who are susceptible to suggestion indicate that when they act on the suggestions their brains show profound changes in how they process information. The suggestions, researchers report, literally change what people see, hear, feel and believe to be true.

The new experiments, which used brain imaging, found that people who were hypnotized “saw” colors where there were none. Others lost the ability to make simple decisions. Some people looked at common English words and thought that they were gibberish.

“The idea that perceptions can be manipulated by expectations” is fundamental to the study of cognition, said Michael I. Posner, an emeritus professor of neuroscience at the University of Oregon and expert on attention. “But now we’re really getting at the mechanisms.”

Even with little understanding of how it works, hypnosis has been used in medicine since the 1950’s to treat pain and, more recently, as a treatment for anxiety, depression, trauma, irritable bowel syndrome and eating disorders.

Hypnosis, Memory and the Brain

A new study points to specific areas of the brain affected by hypnosis. The technique could be a tool for exploring what happens in the brain when we suddenly forget.

Hypnosis has long been considered a valuable technique for recreating and then studying puzzling psychological phenomena. A classic example of this approach uses a technique known as posthypnotic amnesia (PHA) to model memory disorders such as functional amnesia, which involves a sudden memory loss typically due to some sort of psychological trauma (rather than to brain damage or disease). Hypnotists produce PHA by suggesting to a hypnotized person that after hypnosis he will forget particular things until he receives a “cancellation,” such as “Now you can remember everything.” PHA typically only happens when it is specifically suggested and it is much more likely to occur in those with high levels of hypnotic ability, or “high hypnotizable” people. Now a new study shows that this hypnotic state actually influences brain activity associated with memory.  read more 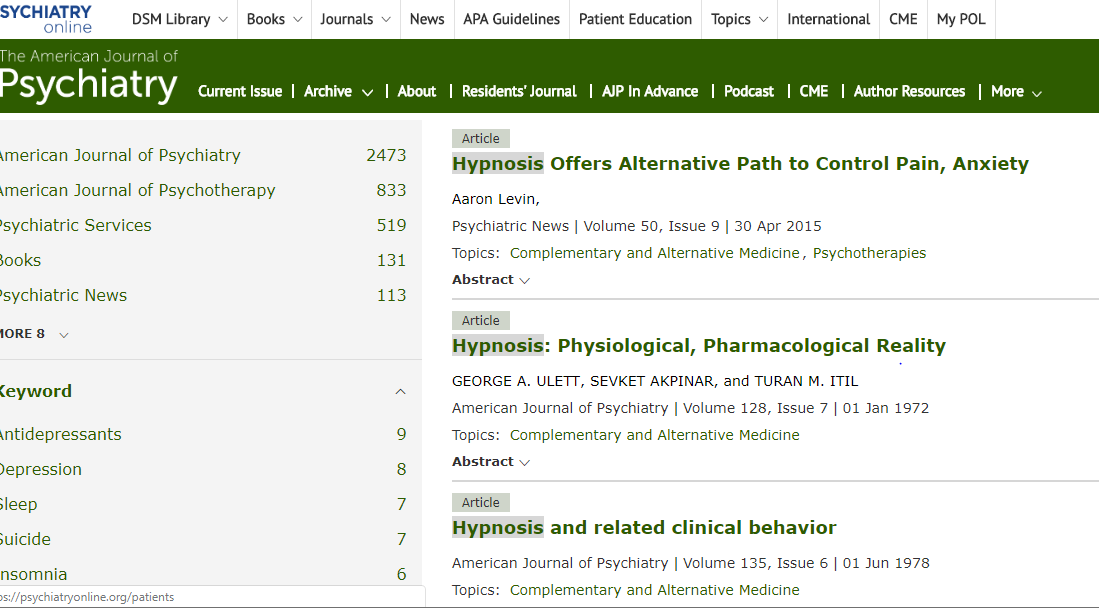 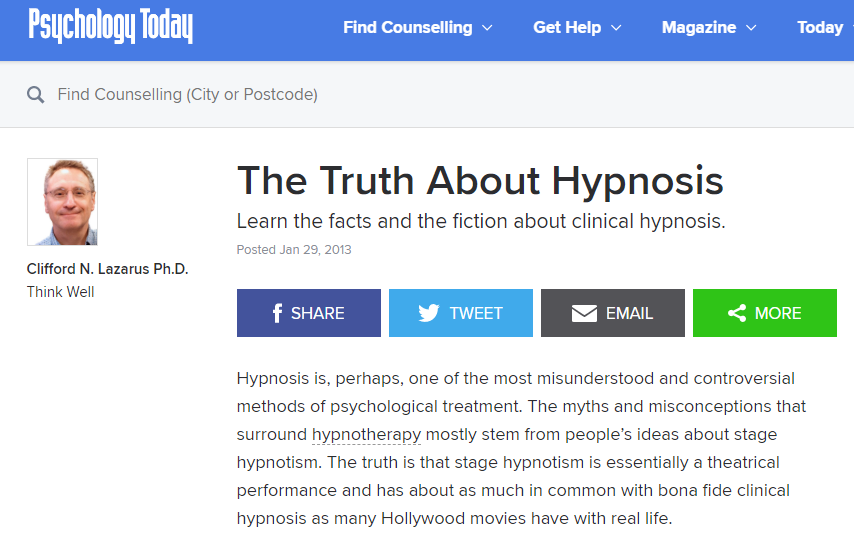 I Got Hypnotized Over Skype and It Actually Worked

Hypnosis can be easier than meditation for worriers who struggle to clear their minds.

KATIE HEANEY is a writer based in New York City. Her work has appeared in BuzzFeed, Cosmopolitan, and The Hairpin. She is the author of Never Have I Ever, Dear Emma, and the forthcoming novel Public Relations.

When I was offered the opportunity to receive hypnosis from a woman named Grace Smith (who goes by Grace Space Hypnosis on her website and app), I was both skeptical and afraid. Smith specializes in “virtual hypnotherapy”—she conducts sessions over video chat, and offers recordings that subscribers can listen to on their phones or computers. Even though I’d be in my own home, being hypnotized over Skype instead of onstage, and even though Smith would be aiming to help me rather than embarrass me, I still felt defensive about the prospect. Something about having to close my eyes made it feel so much more vulnerable than a regular therapy session.  read more